Centre Grey Health Services (CGHS) Foundation Chair Donna Hutton of Markdale, and new Foundation Coordinator John Redmond at the January 5th 2005 Board meeting. That meeting was John’s first in his new position, recently created by the Foundation Board to provide oversight and co-ordination for annual fund raising activities, as well as community relations.

John is a native of the Dundalk area who has returned to his “Grey Roots” after many years in London, Ontario. During his time in that city, John served on the administrative staff of the London Chamber of Commerce, where his responsibilities included communications and government relations. John can be reached by phone at the Foundation offices at the Centre Grey Hospital or by email at: jredmond@cghsfoundation.com 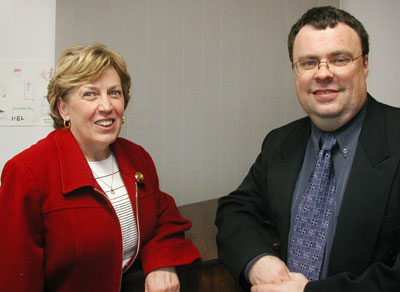